Currently, I’m running 2 polls at the same time. From both of them I’m going to be drawing the TOP 2 runner-ups, making it 4 drawings in total! 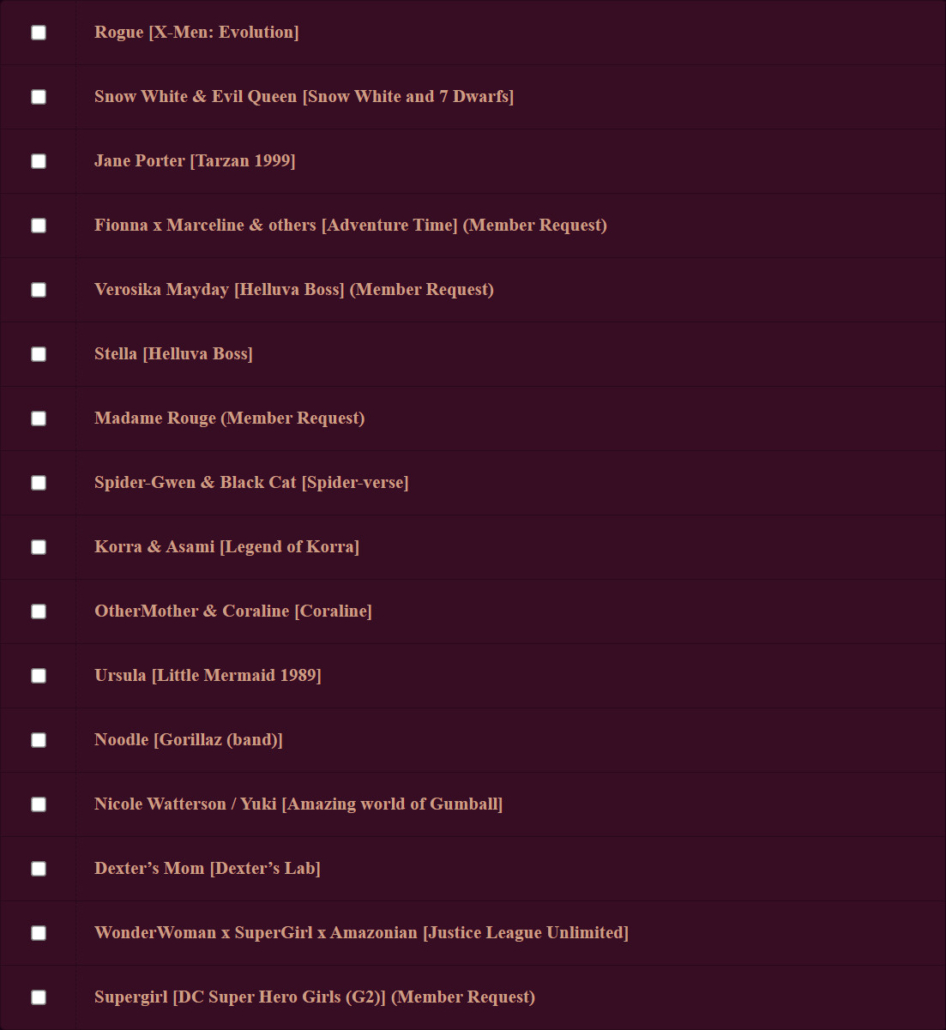 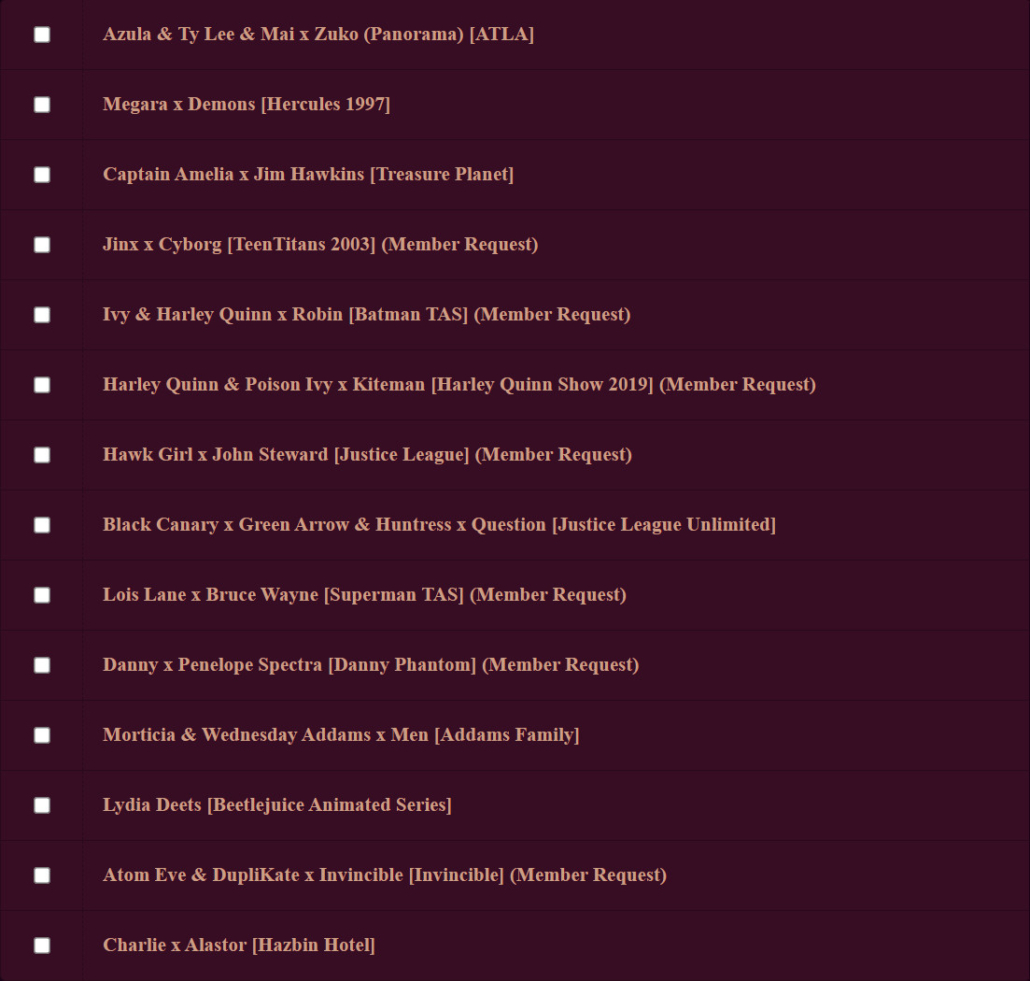 Rogue [X-Men: Evolution] A pinup of Rogue taking a selfie as she is conflicted and looking away while lifting up her shirt and top revealing her boobs. (Once drawn, this will be followed up with a Sex Scene Poll post.)

Snow White & Evil Queen [Snow White and 7 Dwarfs] The Pinup would be of a busty curvy Evil Queen in revealing night-robe staring down Snow White while leaning against a wall with an attitude like: “What does this bitch have that I don’t?” Meanwhile Snow, dressed in a translucent sleepwear, has her back pressed against the wall and is staring flustered at Queens body through her robe.

Fionna x Marceline & others [Adventure Time] (Member Request) It will be a Beach Pinup involving at least 3 characters (More if time allows). In the forefront, the scene will be of Fionna being flustered while getting groped by Marceline in shallow water. In the background I’ll add in Princess Bubblegum staring out of jealousy from the shore. If time allows I’ll also add Fire Princess and Huntress Wizard in the background.

Verosika Mayday [Helluva Boss] (Member Request) Pinup of a nude Verosika walking u sudductively at the viewer while holding squeezing her boobs together.
Stella [Helluva Boss] Pinup of a curvy Stella sitting at home besides her bartable dressed in a translucent night-robe and lingerie being sad and drinking wine as her big boobs squeeze on the surface on the bar table.

Madame Rouge (Member Request) A side angle nude pose that gets a good view of her ass and side-boob.

Spider-Gwen & Black Cat [Spider-verse] Pinup of both women caressing each other. To be specific, Black Cat is mostly posing in a cool way, while Spider-Gwen is wrapping around her and pressing her cheek against Cat’s boob, as she is shorter than her.

Korra & Asami [Legend of Korra] I wish to do another Avatar bikini scene. This time I want both girls to be hanging out in a beach-side bar. Both girls would be in skimpy swimsuits. Asami would be drinking a cocktail while sitting at a bar stool with emphasis on her butt. Meanwhile Korra would be sitting on the bar table with her legs spread apart while Asami’s drink was between her legs. Korra would be giving the viewer a sassy look and pulling on her panties, while Asami would be amused by all this.

OtherMother & Coraline [Coraline] A butt focused pinup from Coraline’s POV of OtherMother as she in a sexy underwear is trying to get dressed. She asks Coraline to help her close her bra. In the background, you can see a mirror reflecting Coraline’s flustered expression.

Nicole Watterson / Yuki [Amazing world of Gumball] Part 2 to my “Cloudy” drawing where Yuki and Nicole have a very close confronting stare-down where they have their boobs squished together and Yuki is clearly winning in the size competition.

Azula & Ty Lee & Mai x Zuko (Panorama) [ATLA] Another of those interactive panorama drawings like “Weaver” and “NonCanon”. This time reaching over 180 degrees. The scene will be from Zuko’s POV as he is being ridden by Ty Lee while sitting on a sofa. Sitting on the left of Zuko, Azula is looking at him in a seductive way while grabbing one of Ty Lee’s boobs. On the right of him Mai is sitting looking sorry while rubbing herself with one hand while caressing Zuko’s chest with the other.

Megara x Demons [Hercules 1997] Sex scene of her getting pounded from behind by demons in Hades while she’s blowing others from the front. The main point of the scene would be her stops the slurping of one demon to look at the next one in line with a huge cock and giving a sassy expression like “Can’t a girl catch a break?”
Captain Amelia x Jim Hawkins [Treasure Planet] I wish to draw her again in my current style. This time I wish to draw her in a sex scene focusing on her butt where she is riding Jim.

Morticia & Wednesday Addams x Men [Addams Family] Part 3 to my last year’s Addams Family drawings. This time it’s a drawing of both women on bed being railed by two men. Morticia and Wednesday are grasping onto each other from pleasure.

Lydia Deets [Beetlejuice Animated Series] A Part 2 sex scene to my previous year’s Halloween Lydia pinup. This time Beetlejuice (in a sexier form) has been summoned and is riding out Lydia on his dick as both of them are levitating from the ground and she’s trying to hold onto him.