The DCember poll has been locked in!
I’m going to be drawing all of the top 5 highlighted candidates!
It will deafieatly go into January of 2022!
The order of the drawings that I’ll will be mixed, for now I can’t say what the order will be, but I can promise that I’ll draw all of these.

The poll was conducted for and made with My Site Subscribers [Click here if you wish to become one!] 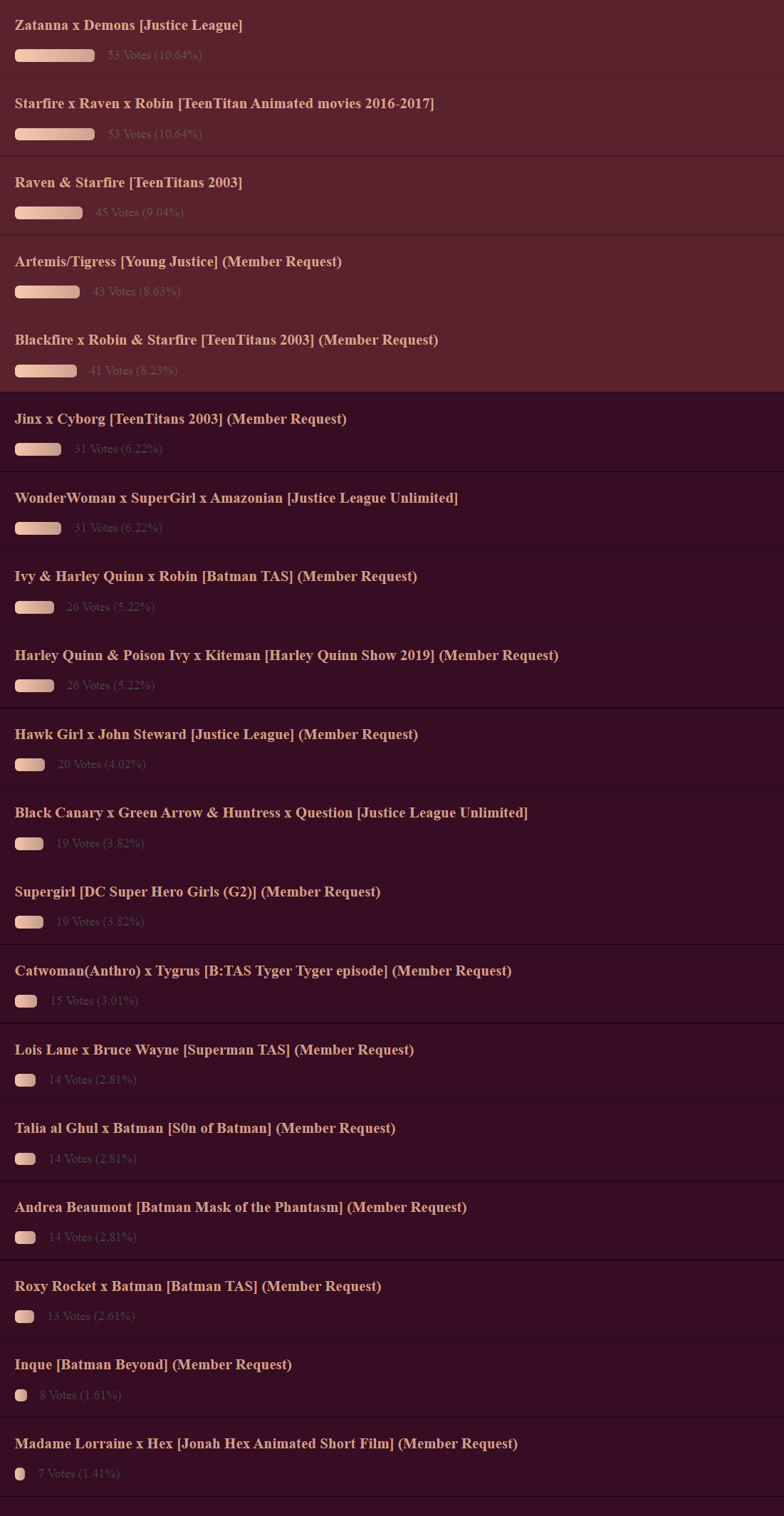 You can read more about what I planned for each candidate by using Ctrl+F to search up your candidate on the last half of the page.

Raven & Starfire [TeenTitans 2003] I essentially wanna do my take on this drawing by RavenRavenRaven, but in my own style, from a more dynamic angle and with more contrasting expressions between the two.

Inque [Batman Beyond] (Member Request) A close-up pinup of Inque laying on a couch based from this scene. Her boobs will be clearly shaped and visible. I’ll also make a version where she is in her black featureless form with her boobs still clearly defined.

Zatanna x Demons [Justice League] Part 2 of my Halloween Zatanna drawing. In this one she’s pulled down to a shadowy realm and is laying sideways as she’s being spit-roasted by demons.

Starfire x Raven x Robin [TeenTitan Animated movies 2016-2017] Part 2 of my last Starfire x Raven drawing – a POV drawing from Dick’s perspective. Raven rides on top of him as Starfire comforts and makes out with her. Essentially, the true reboot of my “Fun” piece I did back in 2017.

Jessica Cruz & Carol Ferris [DC Super Hero Girls (G2)] (Member Request) A pinup of both girls where both of them are posing in very revealing lingerie matching their lantern core colors. Both of them displaying contrasting attitudes – Jessica feeling really uncomfortable while Carol enjoying the attention.

Blackfire x Robin & Starfire [TeenTitans 2003] (Member Request) Scene is primarily of Blackfire passionately riding Robin on the round TitanTower couch. Meanwhile Starfire sits on the other end of the couch in the background staring at them while conflicted from having her boyfriend used and looking for approval from her sis.

Talia al Ghul x Batman [S0n of Batman] (Member Request) A pinupy drawing based on the scene from the movie where they were in a private bar. The drawing would be of them getting ready to bang and Batman is fondling Talia’s big boobs from behind is they slip out of her dress.

Roxy Rocket x Batman [Batman TAS] (Member Request) A piece based on this scene. Roxy will be humping Bats while rolling up her shirt exposing her boobs and looking back at her “final stunt” with intense ecstasy in her expression.

Artemis/Tigress [Young Justice] (Member Request) Drawing of her on knees blowing and sucking off other Young Justice members.

Catwoman(Anthro) x Tygrus [B:TAS Tyger Tyger episode] (Member Request) Drawing of Catwoman being picked up by the large Tygrus and railed from behind by him while standing.

Andrea Beaumont [Batman Mask of the Phantasm] (Member Request) An explicit pin-up of Andrea sitting on the balcony seductively spreading her legs apart with her blouse open. The sun from the back is shinning through the shirt and contouring her body. Quite the pretty dawn. Scene based off this.